by A Haunted Sawmill 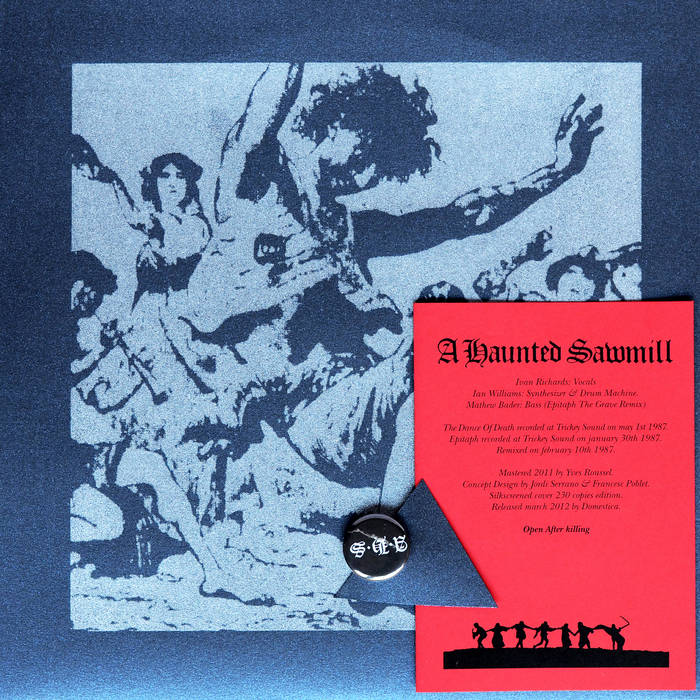 " I have always hoped for the possibility of time travel for many reasons, but especially in this instance where A Haunted Sawmill, could get another chance to achieve wider acclaim. However it comes as no surprise that I have not yet been able to succeed in changing history. So it is amazing news for AHS that after 25 years, the good folk at Domestica Records have chosen to release a limited edition 10” single of two songs we recorded in 1987.
A Haunted Sawmill, were formed in 1987 by Ian Williams and Ivan Richards in Sidmouth, a quiet, regency, seaside town in England.
I first became friends with Ian at junior school we both liked Dr Who and enjoyed listening to records. In 1981, we formed our first band called the Disgustoes, the band’s name would change many times over the years and friends would join and leave as frequent. With a fervent DIY approach, we experimented with creating our own music, hearing our own voices for the first time, and trying to make our recordings sound like the records we had heard on our radios. An early performance for us was at Sidmouth Secondary School during a music lesson where we performed "Make Me A Werewolf", a sort of primal chant of incantations, accompanied by the beating of a large kettle drum.
I was a frequent visitor to Ian’s house, it was a large house on a hill that overlooked a cemetery, I’d arrive with my lyrics and Ian would play me his latest tunes and we would try out different ways to combine the two, blasting out our efforts to the mourners and dearly departed in the graveyard next door. Between practising we would watch rented VHS horror and science fiction films. "

Tracklist:
A. The Dance Of Death... (the fear of your life)
B. Epitaph The Grave Remix