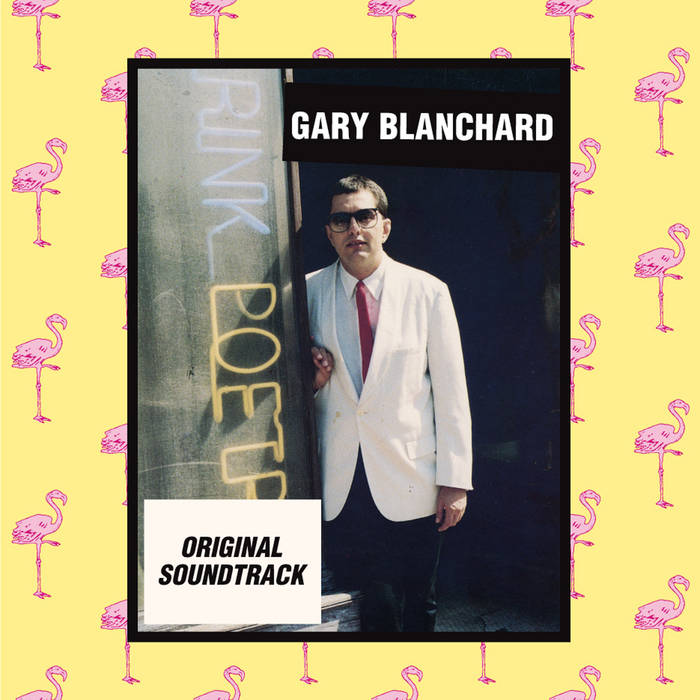 We are delighted to announce that next September 19 we are officially reissuing the extremely hard to find "Original Soundtrack" album by Gary Blanchard. Less than 500 copies of this analog keyboard solo effort were originally pressed, and less than 200 still exist. The album was written, produced, and distributed in Gary's hometown Baltimore, between 1986 and 1987. But, who better to uncover the story behind the "Original Soundtrack" album than Gary himself? Here is an introduction, taken from the liner notes:

"Gary Blanchard began playing guitar in the late 1960s and soon became a regular on Baltimore's folk circuit. Then on April 19, 1986, Gary came home from a peace benefit show, turned on the TV, and saw Laurie Anderson on Saturday Night Live. After 20 years, Gary decided he wanted to do something different. He bought a $100 Yamaha PSR keyboard, complete with autochord and drum machine, and began to experiment with writing in new ways. Rather than having conventional song structure, the music was more open. The words were sometimes spoken, and sometimes sung. Gary also began writing poems and vignettes to include in his performances. While these songs were not as overtly political as his folk-style songs, they commented on life in the 80s with a uniquely cynical Baltimore view. (Many thought Gary was influenced by Baltimore filmmaker John Waters, especially given Gary's love of pink flamingos, but Waters was not an influence on the music.) Gary began to search out other performers to help him bring this material to the stage; at the same time he started working with producer Erik Steensen to create a recording of the music along with some of the spoken word pieces. The album, Original Soundtrack, was released about the time Gary did his first performance with The Generic Art Ensemble. Since the program was called, generically, SHOW, Gary decided to name the soundtrack album, Original Soundtrack. The very first performance, at Baltimore's 8x10 Club, was a two person program with dancer Joan Mosca. Soon the Ensemble also featured Cynthia Gaver on keyboard, Stephanie Waters, a talented sculptor, as a performer and second dancer, and Renee Zorn, who joined right before the ultimate performance of SHOW as sound technician; she later worked as a performer with Gary on the programs Experiments in Low Budget Technology and Natural State. After a break from performing while getting belated college degrees, Gary returned to performing in the early 21st century, back to the singer/songwriter style of his past. Gary feels that the Generic Art Ensemble/Original Soundtrack days gave him an ability to open up his writing. His recent albums feature guitar, but many songs do have keyboards added to give them a fuller, less folky sound."

Blanchard recently wrote a brief background of each track on the album:

Morning in the City - At the time this album was written and recorded, I lived in Baltimore's downtown Mount Vernon neighborhood. This song was a blending of daily images as I went about my day. It seemed a good way to open the program and album.

Polyester From Hell - I had a job that required I appear somewhat straight, including wearing a tie. I was at a yard sale and saw a wonderful (horrible) tie that was sort of purple with silver Pegasus figures. I popped into the Youth Hostel around the corner from my apartment, and my friend who worked there, Janet Tracey, took one look at it said, "That tie is polyester from hell," And thus a song was born. The reference to Tio Pepe's regards a local restaurant that had a dress code requiring jacket and tie and no jeans. I would see people walking in wearing horrible, loud checked, polyester pants; the management seemed to feel they were better tan jeans, I guess.

Ladies in Mercedes - Living in downtown Baltimore, I often ran into "the ladies who lunch." They were usually of a type, designer clothes, hair, and faces and an air of superiority. It was not hard to imagine they were all driving Mercedes Benz cars, the status car of the time. The idea from the song came when one of these ladies almost ran me over in the intersection.

Time/Silence - A recurring theme in SHOW and on Original Soundtrack is time. This piece begins with a series of statements about time; it then takes a darker turn to look at loss. I lost my oldest brother in 1981, and my mother about a year before I began work on this project; the second part looks at the fleeting time we have in life.

Pink Flamingos - While many see a John Waters influence on this song, it was spurred in part by a Laurie Anderson lyric, partially by the popularity of lawn flamingos in Baltimore, and by my own fascination with the bird. At one point, pink flamingo items were the major decorating theme in my apartment.

Technology/Mythology - At the time I was working on this material, I discovered a Southwest Baltimore bar known as The Cultured Pearl. The owner, Ted Getzel, was also a poet who sponsored poetry readings, often accompanied by jazz musicians, One of Getzel's poems, Sir Thomas Pleasure, used the phrase "the mythology of technology. From it, this song was born. BG&E was Baltimore Gas and Electric, the power company in that area at that time.

The Big Chill - Named after the nostalgia movie that was popular at the time. I was breaking from my hippie past, and wanted nothing to do with this trend. This short spoken piece is a declaration of independence from the past, which I found necessary at the time. Ironically, 2016 finds me unapologetically closer to my hippie roots.

Tin Man - Four years after this album, I would find himself in therapy to deal with chronic depression, This song is one of the hints of what was to come. I found himself in sympathy with the tin man who had no heart, and therefore, no love. I also found in myself a trace of the Wizard - confident and strong on the outside, yet, in reality, the little man behind the curtain. This was one song I was unable to play live until my brother Brian joined in during the Experiments in Low Budget Technology days, playing bass.

Walk/Don't Walk - Despite eschewing my hippie roots, this song is about a life where we are constantly told what to do. The man trying to hold us down.

Sowebohemia - An ode to the Southwest Baltimore area that was becoming, in the late 80s, a Bohemian art scene, centered around the earlier mentioned Cultured Pearl. The windows had neon signs, one saying Eat/Art and the other Drink/Poetry.  The song basically takes place in that establishment. The album release party was also held there.

Butterfly - Another song that indicated all was not well in my life; I was indeed in a blue cocoon, but, despite the hope in the song, I had no hope of becoming that butterfly. I'm much better now.

Blue Diamonds - Opening with a poem written for whatever blue-eyed woman I had a crush on at the time, it moves into an upbeat musical piece that was beautifully danced by Joan Mosca in the performances.

Time Travel - I have long had a fascination with the concept of time and time travel. The movie, Back to the Future, prompted this bit of speculation that proved to be more than I could handle.

Picture - I had gone on a hike with another young lady I longed for but was afraid to tell my feelings. (You may remember this from Tin Man as well; I really did need therapy.) I watched her sit on a rock in the stream, and saw her as an angel. I did indeed try to paint it, but lacked any skill to bring the image into being. While Joan Mosca usually danced this, Stephanie Waters danced it in the ultimate performance which was filmed. Maybe one day I'll get that released.

Evening in the City - How do you end a project like this? I figured the best way was by reprising the opening piece, but looking at the images of impending night in the city. The working girls were a part of the scene, so they appear here as well. And thus the day, and the disc, have ended.