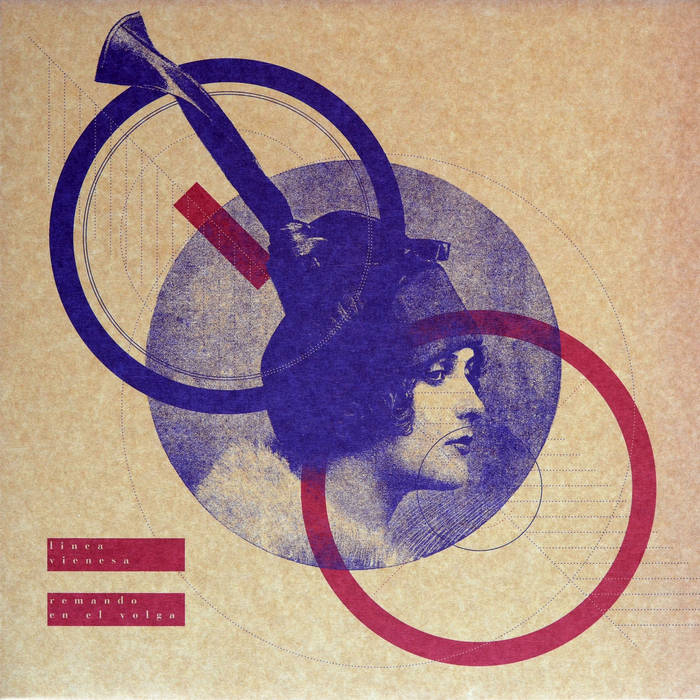 “Last night, after the unique “bis” by Linea Vienesa –unique mainly due to the lack of repertoire than of applause-, the handsome Brummell whispered in Baudelaire’s ear while he was removing his mythical and delicate gloves: “they are, how can I say?, really peculiar your friends, “darling””.

That is how Tomás Cuesta ended his review about the first rock concert by Línea Vienesa, in the newspaper ABC on July the 8th 1981. Two days before, they had done their presentation in the Golden Village in Madrid.
Ramón G. del Pomar wanted to set up a rock band. He played the guitar. He had already got in touch with a bass player, Patricia Álvarez de Lorenzana, but he needed a singer and a keyboard player. He met Mavi Margarida in some night party in Madrid, and he was fascinated by her lips painted in blue, matching her raincoat. “Would you like to sing?” he asked her. Mavi was studying in the school of the dancer Antonio Llopis, “Teatro de la Danza”, so she told him “if you want, we can try”. Hired. Then Mavi brought in Ricardo Llorca, a piano student in the Real Conservatorio de Música de Madrid.

It was in the winter of 1981 when they entered Mario del Castillo’s rehearsal premises, with a rented synthesizer, a drum machine Körg, a guitar Gibson (which had belonged to Pete Townshend), a bass Hoffner and a pair of microphones. The cinema producer Francisco Hoyos was in charge of the expenses.

“The music by Línea Vienesa lies in so many poles that the links would be too long. We just have to focus on the use of the drum machine, its walks on the Renaissance music which, from time to time, is sung in German (although it is not very understandable) and which is, in the end, music made to entertain as well as to listen to it carefully”
José Manuel Costa. Newspaper El País, July 10th 1981.

The group was not created according to a specific concept. Songs began to arise spontaneously: a guitar riff here, a synthetizer melody there, now a syncopated rhythm and a powerful bass. Many hours of rehearsal. A poem by a friend who was musicalizing, a song compounded in the car during a traffic jam, a modernized “copla” in their parents’ home piano, and an interest towards the aesthetics that all of them shared. Up to that moment, any Spanish music group had not used a drum machine to play pop. And that was the first Spanish group out of the commercial circuits which all the national written press echoed.

“What is amazing in Línea Vienesa is, in the first place, how clear they have their purpose. The work done and the drum machine have had good results, the compositions have a strange consistency and they are able to lead everything to the best port”
José Manuel Costa. Newspaper El País, July 10th 1981.

“…and we will say, write that, what they do perfectly is a sort of jet-pop vaguely teutonic, something new and fun: pop as something grotesque, elite desguised as elite, to sum up, a buzz.”
Agustín Tena. Newspaper Pueblo. July 10th 1981.

Concerning time, they coincided with the neo-romantic movement, which allowed them to display their energy both on the stage and in the changing room. Mavi Margarida created the group image, which the other members received delighted. And with a meticulous look in their first concert (all black and white), they showed a great staged display where every member in the group designed his own character matching the environment they had created.

“Rather than plagiarizing, Línea Vienesa has appropriated some of the elements from their English members to adapt them here showing professional good sense. They, as well as Visage or Spandau Ballet (who are going to perform on the same stage on Sunday,) reject the technique as the purpose to reduce it to the limits of pureness and simplicity. They go from the exhibitionist virtuosity to the exhibitionism of ideas. The important thing is that imagination is developed enough to stage a show ”
Tomás Cuesta. Newspaper ABC July 9th 1981

“These boys don’t have many neo-romantic traits, which is not a problem. We must thank their care regarding their manners and dressing, as well as their lack of musical pretentiousness. No mystics at all, fortunately, just modern music: a great synthesizer , a careful bass player with the air of an English soldier exterminating Zulues, an effective and pale guitar player, a pretty soloist… ”
Diario Pueblo. July 10th 1981

They counted on many friends’ help. The designer Jesús del Pozo, Mavi’s uncle, lent the wardrobe to the two women in the group and advised the men for the second concert in Rock Ola. The writer Jorge Berlanga wrote two poems with the aim to be used as lyrics for his songs (“Cangrejos en la Cocina” and “Amor de Primavera”). The painer Sigfrido Martín Begué collaborated in the stage display for Paché discotheque, which would be his last performance. Sigfrido Martín Begué and Carlos Berlanga were two true “groupies”, as they liked to call themselves, of Línea Vienesa.

“… Línea Vienesa, the best group emerged this year from the good reserve in Madrid…” “A dozen of music themes which make the best catalogue created here up to the date of the new synthesized sensitivity .The best guarantee that exquisiteness doesn’t have to be something neither twee nor pedantic for intelligence”
Tomás Cuesta. Newspaper ABC. September 22nd 1981

Four concerts in the capital city, two in July and two in September, a demo with eight themes recorded in the studio, and the group was dissolved.

That is how Tomás Cuesta finished the written chronicle on Línea Vienesa’s second concert in Rock Ola:
“After an hour of concert, when the members of Línea Vienesa left the stage, the night was beautiful, cheerful and easy. The spirits of talent, excitement and surprise had been conjured up and were wandering over there, between the plants, being pampered, curled up…”