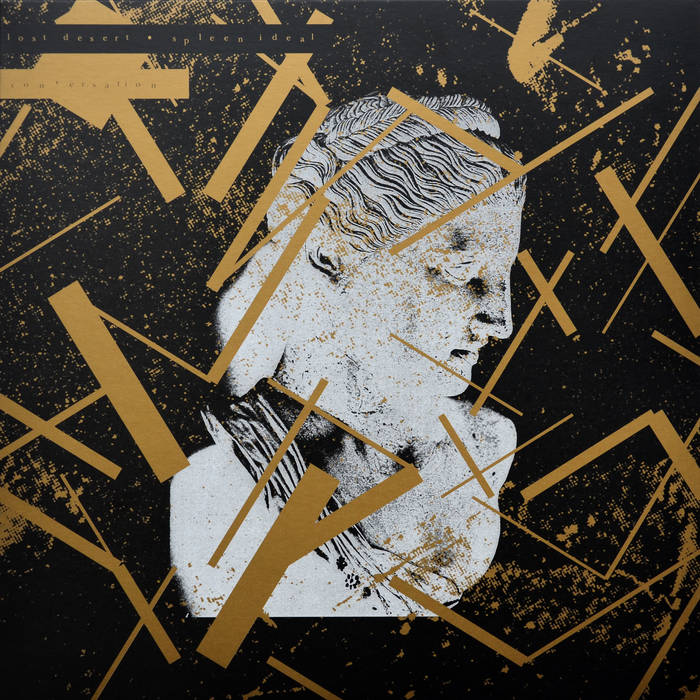 florian_berne This album is a discovery to me. Moving, refreshing and inspiring... Favorite track: A2. Lost Desert - Étrange Satire.

Katja Ruge / Can Love Be Synth

The area of Versailles, not far from Paris, witnessed in the late 80s the emergence of an alternative movement made up of many noteworthy bands that recorded and distributed their music using cassette tapes. In spite of the abundance of groups and small independent labels, distribution remained an issue, and, so, many acts took it in their own hands. This is the background against which Marc Collin, French musician, film music composer and record producer (best known as the founder, with Olivier Libaux, of Nouvelle Vague) joined forces with Pascal Mayer (later to launch The Perfect Kiss label) to form cassette-label New Horizon, active between 1988 and 1990, with the goal of promoting this emerging local scene. Short-lived as it was, and with only four titles released, the label managed to become a cult imprint and is today a must if one is to delve into the French independent cold-wave. One of New Horizon most cherished releases, in great demand by connaisseurs, is the cassette-compilation 'Nos Années Folles' (1990), featuring the most innovative and moment-defining bands in the milieu; with only 1,000 copies pressed, it is now an extremely hard to locate item. Represented acts are Lost Desert, Rosa Luxemburg (both unreleased at the time), Spleen Ideal (a project by Marc Collin and Xavier Jamaux), Pro Memoria, Formes Nouvelles and Clair Obscur, a band already with a long standing in the French independent field but admired by Collin and, so, asked in. Each band contributed two songs. Not long after the release of Nos Années Folles, New Horizon launched the album-cassette 'A Travers Le Miroir' by Lost Desert.

Our Conversation split 6-track mini-album retrieves, 27 years on, the sonic legacy of this particular scene, local, spontaneous and rather DIY (probably out of necessity as much as ethos) and, as such, truly authentic and meaningful within its musical boundaries. We have selected two of the most outstanding bands, both present on the 'Nos Années Folles' cassette: Spleen Ideal and Lost Desert, with 4 songs (2 by each band) originally released on the New Horizon compilation, plus 2 pieces from around the same time: “Encore Un Jour”, by Spleen Ideal, never released so far, and “Sunrise”, by Lost Desert, previously found on the cassette compilation Mea Pulpa (Dépendance Continue, 1990). The original master tapes have been used in all the tracks.

Lost Desert was founded in 1986 in the suburbs of Paris, near Versailles. The name of the band was suggested by a friend and appreciated for its mysterious meaning. They found inspiration in bands like The Cure, Cocteau Twins, Dead Can Dance, Bauhaus… but also movies and visual art. Initially, the band was founded by two friends and their younger brothers. Feeling they could improve the vocals, they soon hired a female singer and started to play live in the Paris area, using a 4-track device for recording, usually with a drum machine.

Lost Desert released their first cassette Heterogen Infiltration, an entirely homemade affair, down to the duplication, in 1989. This tape was sold in a few specialized record stores in Paris. A year later, New Horizon released the album A Travers le Miroir , featuring both new versions of songs and fresh tracks. Several songs by the band can be found on various tape-only compilations, like: Nos Années Folles, Ineptie, Mea Pulpa. The last track by Lost Desert was released in 1991 on Supercherie, when the band didn’t even exist anymore.

Spleen Ideal (in reference to a poem by Baudelaire) is a French band founded in 1985 by Marc Collin near Versailles in France. After a first line up that included Nicolas Godin (future member of AIR) as bass player, the band became a duo in 1988 with the arrival of the singer/bass player  Xavier Jamaux. After a few concerts and several tracks in different cassette compilations, they finally changed their name to Persona in 1989 and split in 1990. Collin and Jamaux reformed the band a few years after under the name Ollano.

Very influenced by 80s new wave and electro, Spleen Ideal was a kind of proto-French touch. Marc Collin has been in many projects since then including the successful Nouvelle Vague. Xavier Jamaux became an international soundtracks composer, and he still releases music under the pseudonym Bang Bang.