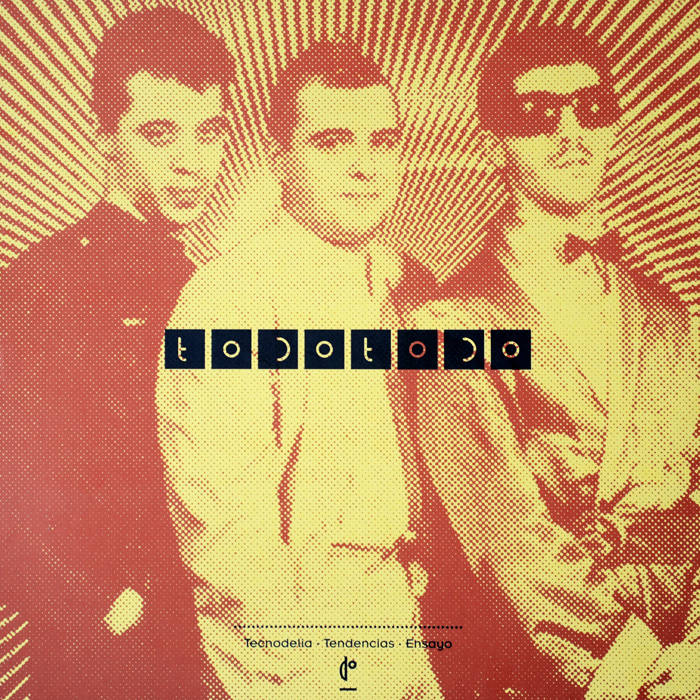 TODOTODO was a Technorchestra which emerged on the music stage at the beginning of the eighties, just when Techno movement was the dominant one in the European music framework.
Although its influences were much wider, the three members in TT were absolutely committed to the contemporarity of Techno music language and its possibilities. Every third of the trio was, in itself, an open door towards creativity and each one was concerned with a different view of the same reality, to which, through different ways, they wanted to reach all together with every song they wrote. Francisco “Paco” García, in an impossible get-together with Truman Capote, Andy Warhol and Erik Satie, translated into numbers the stave graphology, almost in a cabalistic way. Pedro “Pequi” Vidal, between Nijinsky and Isadora Duncan learnt the discipline which gives pomp and circumstance to the mise-en-escène, the 'live'. Carmelo Hernández, not far from Debussy, spied with his binaculars, from a terrace in Montmartre, to 'The Queen Kelly'. Yes, they were three boys un peu compliqués.

Actually, TT was the consequence of the melting of three strong characters, with a great team-work capacity, and incredibly charming as a corporate organization. A non-musician, as he is defined, with an IQ remarkably above the average, PacoGarcía. A professional musician, Pequi Vidal, interested in finding out what is going on beyond the walls of the Conservatoire. A vocational musician, Carmelo Hernández, willing to use the musical language as a support to transfer cinematographic emotions and sensations.

TT locked themselves in a top-floor flat of a building, which they gave the meaningful name of ‘The Hyde´s Lab’. There, they worked feverishly for 5 months preparing their live performance and composing a completely original repertoire of which they left sonic witness in two rough cuts (7 songs in total, included in this LP), and a jingle for the radio programme, included in the Sampler Non Plus Ultra, also edited by Doméstica.
TT generated a sonic wall which, at real time and without pre-recorded tapes, on 'strict live', left nobody indifferent. From the spectacular 'live' of TT there is an unpublished video of their last concert, recorded precisely in Rock-Ola. The band broke up after that concert, and the rehearsals of that concert have been exhumed in the documentary by Antonio de Prada, ROCK-OLA, UNA NOCHE EN LA MOVIDA. That wasn't their best concert as, little before the performance, Carmelo's Rickenbacker was dammaged and they couldn't find another one on time. However, that concert was one of the most glamorous ones; among the audience, there were Pedro Almodóvar, Fabio McNamara, Alaska, Nacho Canut, Carlos Berlanga, Paloma Chamorro and, basically, all the “Movida” celebrating the New Year. We hope it will be possible to have it soon, for everyone's delight.

The rules of TT were simple: ‘humans compose-programme, non-humans execute it’. There was not a bass guitarist: a computer executed the bass sounds. TT didn’t have a drummer, either, as only a drum machine could follow those wretched patterns ‘four-on-the-floor’, between 120 and 150 bpm.
TT probably broke up because they were not capable of overcoming the external pressure, riddled with interferences which harmed the trio’s internal cohesion. Nevertheless, still nowadays, and without having been able to enter a recording studio yet, TT continues to be an unrepeatable, admired and valued group. Both Muzak / MegadeathExtrème (two thirds of TT), and also RT-1(the remaining third) spread the original sound of TT in their brilliant recordings. However, for both proposals, TT has always been their failed subject, their origin and their raison d’être.
Lou Cypher