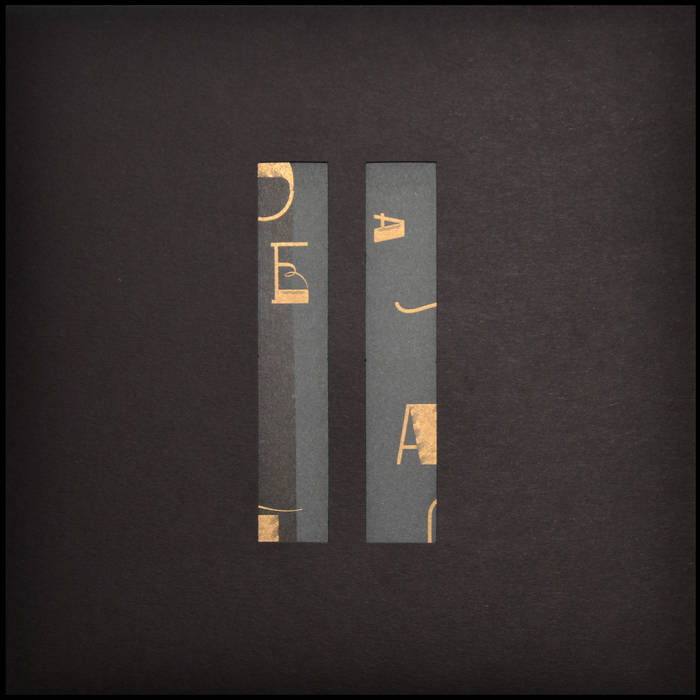 This is the second volume of 'Domestic Landscape' series, a collection of rare electronic music compiled from bands around the world.

Once more, and as we did with the first volume of ‘Domestic Landscape’, we present you a selection of songs that you won’t find in any other format, apart from of a few exceptions which were published in cassette and in very limited editions. All the bands selected have something in common: they are projects born out of the need to express an own, original and genuine message, built up from a solid basis and the result of hard work. Needless to say, all of them did it through analogic technology and, therefore, the main transmitters of this message are the synthesizers, the drum machines and the sequencers. In addition, each of them created, promoted and sold their music in a totally independent way; in a context which was very different from the current one and, up to a degree, much less friendly. Some of these bands have survived for years, others have disappeared and others have mutated; however, now we can enjoy their music again and give them the recognition that they deserve.

· A1: Tranquil Eyes "In These Times (Original Mix)"
Unreleased/Demo (Netherlands, 1984)
"Paul Oosterbaan  en Lex Grauwen had been making music together since 1972, but when the Korg MS-20 hit the scene in 1980-1981 things really started happening. Dozens of tracks were recorded, of which a handful was selected for the 'Tranquil Eyes -Walks' album, to be released as a cassette. In 1985 they were rehearsing in Paul's house for a Dutch tour, when things went terribly wrong. Paul's apartment, studio and rehearsing-room, burnt down, taking his wife and two children in the fire. With equipment gone, tapes destroyed, and minds blown, it took quite a while to get back into things.... Later on, Paul being away in Spain to recuperate, Lex kept writing tracks, incidentally Paul would come over, and new recordings were made. Some of these tapes ended  up on 'Stichting Stopcontact Contactdisc' and other compilation albums. It wasn't until 2004, right after Hans Grauwen of 'Frozen Ducks' had died, there was a sudden interest in the 'Walks' cassette, which was finally released on vinyl through Onderstroom Records..."

On this occasion we introduce you the original mix of the song ‘In these times’. This song has remained absolutely unpublished so far, but their best-known version appeared in the valued and very hard to find compilation ‘Contactdisc 4’ (1986). It was Recorded on several 'Tascam PortaStudio's' in 1984, this is the all analogue version.

· A2: Sleep Chamber “Victmm (Sex Mix)”
Released on ‘Drastic Perversions’ Compilation (Inner-X-Musick, US, 1984)
Sleep Chamber is an American industrial band fronted by John Zewizz. The band is known for using S&M, bondage and magic imagery on their artwork, during their performances, and within their lyrics. Formed in 1981 by high school friends Zewizz, Eugene Difrancisco, and Phil Brosseau, over the years the Sleep Chamber lineup has changed many times with Zewizz being the sole permanent member. From 1982 to 1999, Sleep Chamber put out a considerable volume of music (releasing over 70 recordings, and participating in over 35 various artists releases). After an extended absence, Sleep Chamber returned in 2008 with a new lineup, a slew of new releases, and a revised name, SLEEPCHAMBER.

Their earliest works were experimental and electronic/industrial in nature. Live Sleep Chamber performances were quickly labeled as resembling a "Black Mass", with smoke (containing a special blend of incense) billowing out of machines, and the band donning black bondage masks while performing on stage.

· A3: S.M. Nurse “She”
Unreleased/Demo (Netherlands, 1982)
Around 1980 Menko Konings (eM.) started the legendary Dutch underground formation S.M. Nurse, first together with Jos Jak and later also with Anneke Stempher. S.M. Nurse experimented with collage-like music and were inspired by N.Y.-ultra, disco e.g. The band mainly performed in the Amsterdam ultra-circuit, such as Oktopus on the Keizersgracht and D-Day in Paradiso. They also performed at clubs such as Mazzo on the Rozengracht and the transgender club Madame Arthur in the Warmoesstraat. Pretty soon, S.M. Nurse was noticed by radio programme maker Richard Zeilstra from the Dutch broadcaster the VPRO and they were played regularly on radio programmes such as RadioNome and Spleen. They performed live on radio in the villa of the VPRO in Hilversum. They also contributed to the theme cassette Turkish Delight of van Kaye & Ignit's record label Ding Dong Records. Among releases were a live registration on a bootleg cassette, at the time available at Staalplaat, and a cassette of SM Nurse on the independent record label Top Tape. At the end of 1983, S.M. Nurse split up.

· A4: Effetto Joule “Mechanika”
Released on 'Ultraviolet A' Album Cassete (Self Released, Italy, 1990)
The italo wave trio Effetto Joule is formed in Bologna during the second part of the 80’s. The pulsating heart of the band were the brothers Flavio and Valerio Biagi with the collaboration of Valerio Tassinari. Deeply influenced by the British synth pop heroes like Ultravox and Depeche Mode, the Biagi brothers were able to merge that kind of epic sounds with the more romantic Italian vision of the electronic dark wave. After the first demotape printed in 1988, came the first official release on 12'' vinyl, titled Robespierre published in Italy on 1989 (and recently reissued by Mannequin Records, 2015). After buying a sampler machine, the EJ produced other demotapes: UV-A and UV-B, with new songs. Among these tracks there is also Mechanika, a powerful piece of electro techno-romantic electro-pop, proposed in every live shows from 1990 to 1992 when the EJ officially disbanded. The Biagi brothers continued to produce songs until 1998.

· A5: Robert Lawrence “She Moves Like A Machine”
Released on ‘Integration’ Cassette Compilation (Integrated Circuits Records, UK, 1983)
" In 1983, Robot, as he now calls himself on various 5X0D and solo recordings (inspired by the 1960s UK TV programme Fireball XL5), is contacted by Colin Potter with a request to contribute a track for a forthcoming Integrated Circuits Records cassette compilation. He switch Machines on (including a Roland TB-303 Bassline, Roland TR-606 Drumatix and Korg MS-20 synthesizer) and using the SOS overdub feature on his Akai Reel to Reel Machine he records a positiv tune called She Moves Like A Machine. He uses the alias Citizens Of Science (a name taken from a track title by Japan's number one top pop group Yellow Magic Orchestra) and searching for a song title he thinks that the music could be said to perhaps suggest unswerving mechanical resoluteness, interspersed with a drum machine pattern hinting at awkward ungainliness. Mailed off to Colin, it is released on the Integration tape... "

· B1: Parade of Sinners “What A World!”
Released on “Parade of Sinners” Cassette Album (K.O. City Studio, US, 1986)
Begun in 1986 with cassette only releases, this was a project by Data-Bank-A producer Andrew Szava-Kovats. It was based on combining media samples with dark electronic rhythms and synthesizers, but no vocals. This combination is common now, but it was still fresh in 1986. Andrew used unusual clips to create a world view that embraces futility and death. These are realities most people run away from. Andrew runs toward them.

· B2: Twelve 88 Cartel “Flags On A Hill”
Released on “We Encourage Resistance” Cassette Album (Bite Back!, UK, 1986)
Electro noise terrorists Twelve 88 Cartel, founded by Simon Hearfield (DJ, musician and record producer, widely regarded as a leading exponent of electronic music both in his hometown, Portsmouth, and beyond), Ed Jobling and Tim Martin in 1985 at Portsmouth College of Art, has produced a number of releases between 1986 and 1991 on the Bite Back! label, home to the producer of their first EP Jim Shaw of Cranes. Twelve 88 Cartel had always used a lot of film and video in live performances, and the video sublabel of the legendary Factory Records; Ikon/FCL, released a selection of their tracks in VHS format ('Evidence', 1990). The band split up in 1991.

· B3: Opfer Der Hingabe “Prediction (Brainwave Version)”
Released on “Felicity” Cassette Album (Weisser Herbst, Germany, 1990)
"Opfer Der Hingabe (ODH) are Roman Rütten (piano, synthesizer, arrangement and mix) and Dieter Mauson (lyrics, vocals, bass und guitar). Roman from Frankfurt am Main and Dieter from Leer, Germany. In 1989 Dieter moved to Mainz and the two artists joined up in Frankfurt, both rooting from post-punk, new wave, 'synthie ' and dream pop, at which time they were both active in the international audio cassette scene; Roman with ‘Schaum Der Tage’ and ‘Endraum’ and Dieter with ‘Nostalgie Éternelle’. In 1989 ODH did their very first studio sessions in which they recorded a cassette album called Felicity. The c30 tape was released in 1990 on Weisser Herbst, Roman's label..."

· B4: Handful Of Snowdrops “The Raving”
Unreleased/Demo (Quebec City, Canada, 1984)
It was more than 25 years ago that Handful of Snowdrops (HOS), a pioneer band in the Canadian Electronic New-Wave, released its first and mythical album 'Land of the Damned', which, with own effort, has become an essential and cult piece of music to worship especially amongst all kind of true collectionists and music-lovers, into the most Gothic, Electronic and Dark Wave. It can be observed in the growing interest all over the world towards this first album, self-produced in 1988 and was reedited in 1990 by the record label C'est la Mort for the American version. Long time before HOS released their first album, this cult band had produced, since their beginnings in 1984, an amazing amount of demos, although they had never managed to attract the interest and attention of the big record companies, despite their originality... and here is a clear example.

Printed at L'Anacrònica (Barcelona, 2016).
Mastered by Yves Roussel 2015, except track A1: “In These Times”, mastered by Ruud Braumuller, Lex Grauwen and Paul Oosterbaan.
Designed by Domestica Records & L’Anacrònica, 2016.