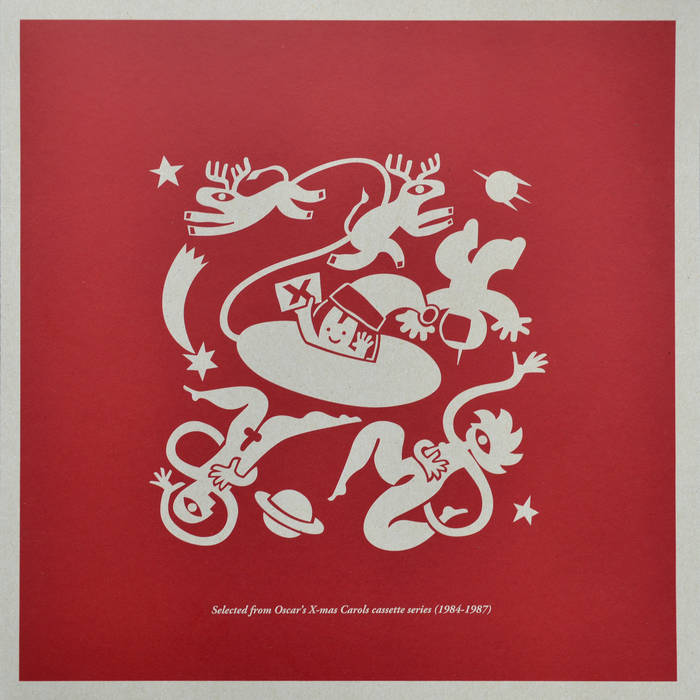 A young Oscar Smit (DJ and music journalist) falls in love with the torrential music of the Christmas recording by Phil Spector, “A Christmas Gift For You”; and since then, he has been obsessed with all the versions, albums and songs which have something to do with Christmas time.

On the other hand, he is also a true fan of dark and experimental music, and knows largely the underground scene which arose in the 80ies; an international movement with a working philosophy totally “DIY”, which used to distribute most of their publications by post and cassette format. So he tries to follow the possible common points between both passions, but soon realizes that they are basically nonexistent. Far from getting discouraged, he starts up an unusual project: to ask these bands, just known by a few and which he loves so much, to record their own Christmas tracks.

This is how in 1984 “Oscar’s X-Mas Carols” is born; the first cassette compilated by Oscar Smit’s imprint Noel Tapes in Holland, which would be followed by two more; “Santa Claus Comes” (1985) and “Is That You Santa Claus?” (1987). X-mas Card From Outer Space (Oscar X-Mas Carols 1984-1987)” is a selection of the best tracks of these three cassettes.

The story behind “X-mas Card From Outer Space” by Oscar Smit himself:

" I've had a thing for Christmas music ever since I heard Phil Spector's Christmas Album in the late 1970s. Through the years I've become a massive collector of every genre of Christmas songs. Each year, I can’t wait for December, when I can play Christmas music again.

In the 1980s I worked for Vinyl, a Dutch monthly magazine. A lot of music at that time was released on cassettes. A significant number of cassettes were sent to Vinyl, from both the Netherlands and abroad, so many in fact that I began writing a separate column, Dolby, to discuss them. For some years, my Dolby page was a meeting place for fans of cassette music. In addition to Christmas music, I was also a big fan of experimental sounds, and I soon noticed that very little electronic Christmas music was being produced. That's when I got the idea of creating a cassette myself, featuring adventurous and original Christmas numbers. I was in contact with a lot of musicians because of my work at Vinyl, and I invited a large number of them to record a holiday number especially for my Christmas cassette. The production and distribution were in the hands of Ed and Ignit from the Ding Dong label. The first edition of Oscar's X-Mas Carols was released shortly before Christmas 1984, on my own Noel label. I never received any payment or sales figures from Ding Dong, so I have no idea how many copies of that first edition were sold. That's one of the reasons why in 1985 I decided to take on the distribution myself. Plus, I'd just gotten hold of a rubber stamp that was suitable for stamping serial numbers. That gave me the idea of producing a limited-edition, numbered cassette. I’d package the cassette attached to a picture frame containing a beautiful black-and-white photo of my sister's hand, holding some of my parent's Christmas ornaments. My friend Theo Kamphuis not only took the picture, he also had to develop it 350 times, because that was the edition's print run. We spent two evenings assembling the 350 packages, each containing a framed photograph plus a cassette. The artistic-looking result disguised the fact that the project was a financial catastrophe. I barely recouped half of the 4000 guilders in production costs. I had well and truly learned my lesson and decided to stop producing cassettes. However, in 1987 I started to get the itch again, so I invited a large group of international and Dutch artists to send me numbers for my third Christmas cassette. This time, to cut costs, I did everything except the cover design on my own. The cover was mimeographed, and I reproduced the cassettes myself. And so, Is That You Santa Claus? was created, in a limited and numbered edition of 100, made for approximately one-tenth of the production costs of its forerunner.

In 1988 I got a full-time job and had little time for my Christmas label. Subsequently, cassettes lost more and more ground to the encroaching CD format. A fourth cassette would therefore never materialize! It wasn't until 2010 that Oscar’s X-mas Carols volume 4 would be released, in the form of a CD entitled Christmas Cover Up. The songs on that CD were covers of not-so-well-known Christmas numbers, performed by such artists as Hunter Complex, Jaap Boots, Eddy de Clercq, and Kaat Hellings. The music, however, was much less experimental than on the cassettes.

Now, in 2017, there’s a vinyl version of Oscar's X-mas Carols. For this album’s tracklist, its compilers Jordi Serrano and Oscar Smit made a personal selection from the three previous cassettes. In this, they were unfortunately hindered by the limited playing time available on a long-playing record. Of the fifteen tracks on this LP, seven come from the Netherlands. I've remained in contact with many of the original artists and was able to track down the rest on Facebook. Welcome to the digital era. I wish you much listening pleasure with these tracks from the previous, analog century! "

Mastered from the original tapes by Ruud Lekx.
Compiled by Oscar Smit and Jordi Serrano.
Cover painting by Max Kisman.