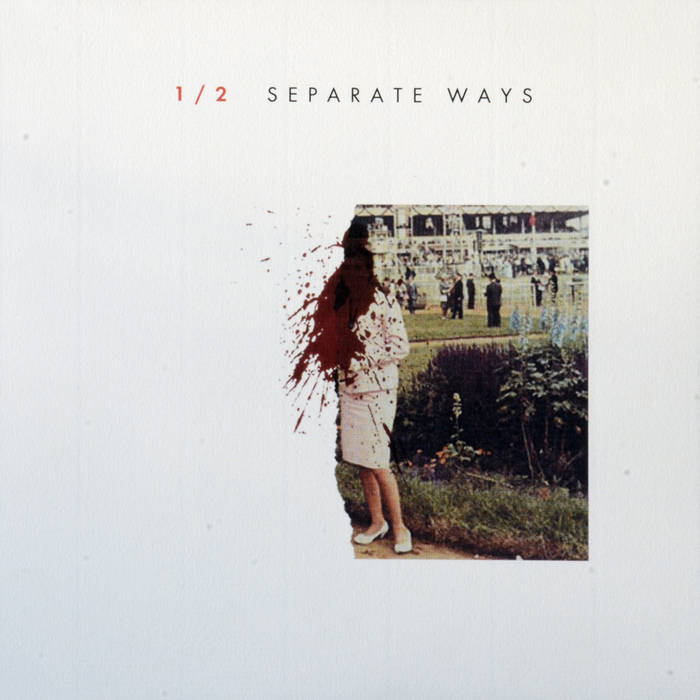 Hello folks !
We are particularly excited and eager to announce the birth of something new in Domestica… ‘S’ is not only a letter, but also the emblem which embodies a publishing line emerged out of the unavoidable need to approach our audience to those contemporary projects which, day by day, wonder us; it is due to its originality and freshness and to its incredible similarity, mainly analogous, to the mentality and spirit of artistic and musical creation risen up in full swing of the analogue age.

To celebrate it, we are delighted to share with all of you the first reference ‘S’; DOMO1-S is a wonderful limited edition of 240 copies in single 7” format by the group from Zagreb (Croatia): 1/2, a project led by Ivan Antunovic, a multifaceted artist and creator of the independent stamp 0.5 specialized in editing little jewels in digital format with a purely D.I.Y. mentality; he is also responsible for other music bands such as Umrijeti Za Strojem, a project which he edited in 2010 with the record company Genetic Music, and which has participated in the compilation “The Future Echo Tapes” by the German label Aufnahme + Wiedergabe (2012), amongst many others.

Biography:
So much can happen in three years time. For 1/2, it seems like a long way. Emerging onto the so-called "bedroom synth-noir" scene in January 2009, 1/2 immediately grabbed attention from other DIY enthusiasts abroad. Using various internet sources discreetly promoting his work gained him friendly acquaintance and support, which is without doubt a surprising (if not unexpected) launch of a mini-career that successfully enters its fourth year span, already summing up a variety of releases on the singles, mini-album and EP front, including compilation appearances and collaboration/remix work.

"1/2" is the moniker of Sol Ist - who, along with his long-time friend and collaborator Robi, once fronted the experimental duo Narrow. Prior to this, Sol Ist was recording shortly under the name of "Mekanismo Va Morir", which coalesced into a duo that became Narrow. In their early period of 1997-98, Robi and Sol Ist started a tiny DIY imprint they called Aside Thorns, in order to present their, then-still undefined-by-name body of work. At the time, Robi was still experimenting with other friends of his, under the simple name KRD - the latter was largely infatuated by the work of Current 93, Annabelle's Garden, Death In June and the like (Sol Ist included some of KRD's rough sketches on Aside Thorns' very first compilation cassette - "Unexploded Tickets").

Formed in 1998, Narrow operated in isolation, using only cassettes, improving their manual overdubbing technique to create something that is now regarded as "tape-industrial". Varying between free improvisation and melody, some of their early cassettes merely count a few physical copies each, until the duo, encouraged and inspired by some of their close friends, finally stepped out of their obscure world, into the public and presented some of their work on a more proper scale, also featuring very few of their live performances (the first one actually being as early as 1999, in the legendary Lapidarij Club in Zagreb, supporting Ivan Krželj's then-known "Wave FM" radio programme).

Narrow weren't meant to be a "live act" as such and this somewhat tempting urge to perform somehow pointed out to both, the highs and lows of what they did (not) want from such an experience. By mid-2000s however, they were still a strong creative force, making most of their quite large catalogue of home-made recordings available to the public for the first time ("Cassettes" remaining the most extensive representation of their entire early output up to 2004). The following period between 2005 and 2009 was equally diverse and somehow pointed Narrow towards the more melodic electronic pop sound. While delivering two more mini-albums and a couple of singles with Narrow and inspired by other acts (Monofonik, Ilegalne emocije and Margita je mrtva), Sol Ist started his first proper solo-manifesto in 2006, called "Umrijeti za strojem" (now a parallel world to 1/2, with equally extensive discography so far). Immediately appealing in its own right, UZS in a way echoed spelling the end of Narrow, which finally concluded in 2009.

By 2009, 1/2 was already underway, starting to record new material. Deliberately chosen the numeral name, "1/2" symbollically stands for the "remaining half" after Narrow ceased their operation. Unlike Narrow's unbrushed but appealing tape material, 1/2 turned more towards achieving aural sophistication through technological modesty. At first, the cassette overdubbing was still used to record, but 1/2 started experimenting with other devices pretty quickly, in order to achieve a more polished sound. The result is a number of test recordings (most of these being covers of other people's songs), singles and EPs plus already three mini-albums under his wing. The latest effort being "Everyone Is Lost Behind the Headlines", released under the fictious group name of "Split Personalities". In parallel to all this, 1/2 started a new DIY label affair, 0.5 (numerically paraphrasing his musical "half"). 0.5 expanded its catalogue pretty quickly, including other people's work as well. In addition to this, he started a periodical called "Small Doses", with the intention to inspire a dormant underground scene, by presenting its fragments, not necessarily in the music field alone. In conjunction with other artists, the 0.5 catalogue also features music by Alone In Heaven, Videododir, Hemendex, Popsimonova & Zarkoff, Simon Fisher Turner and Colin Lloyd Tucker (Tucker provided a stunning vocal solo on one of 1/2's recent songs, "Analogue Dreaming In the Digital World").

Throughout the last couple of years, some of the international independent labels expressed interest in releasing material by Narrow, Umrijeti za strojem and 1/2 respectively. The first who have achieved this were (T)Reue um (T)Reue, a small German experimental imprint with a cult following. In 2010, TuTRuR - on recommendation from Nitkov of Ilegalne Emocije - contacted Sol Ist, in order to propose an LP release of Narrow's work. The end result is a selection of pieces, called "From DIY With Love" which gained positive reviews among the obscure music lovers' circles. In 2012, TuTRuR also released a ltd double cassette of Umrijeti za strojem's work.

Alongside TuTRuR, another label - Genetic Music, also from Germany, proposed a split 7" single release, featuring Umrijeti za strojem. This idea actually came about after Rainer Di Meo of Genetic Music heard another song 1/2 was involved in - called "Against" - which was made in collaboration with erehwoN (electronic music enthusiast from Sisak, Croatia, who records under his pseudonyms "Cable Bends Steel" and "X_trackT"). 1/2 and erehwoN exchanged some of their ideas and "Against" was the result - ending up on the Genetic split 7" single with UZS, which was greeted among some people as one of the finest releases of 2010. Of course, "Against" needed a name to be released under, so erehwoN and 1/2 decided over "Neither/Nor" to present this collaboration work with.

Somewhere along the way, 1/2 was commissioned to do remix work for Bodystyler, one of Dessau's Electric Tremor label protegés. His "Pointless Cut" of Bodystyler's piece called "Trouble" was included on the group's ltd cassette/CD-R package.

In Vienna, a group of people started organising "Future Echo" nights, centered around Michael Giebl and the DJ team called "Crazy Hospital", presenting artists from the recent underground scene, which led to inclusion of both, 1/2 and Umrijeti za strojem in Future Echo's live repertoire, as well as featuring them on both promotional cassette compilations, called "The Future Echo Tapes" (the recent one being a double treat, released in conjunction with another impressive imprint - Aufnahme + Wiedergabe, from Berlin).

In 2013, Sol Ist will feature his eighth international exposure - third as 1/2, this time for Domestica Records, based in Barcelona. Earlier last year, Jordi Serrano of Domestica contacted 1/2, expressing interest in releasing some of his music. The initial idea was to release 1/2's second mini-album "Analogue Cuts In Digital Ways", but during a period of scheduling this release, the final choice became the EP "Separate Ways", originally released in 2011, now to see the light of day as a 7" single, and also marking the first contemporary artist's artist's debut on Domestica Records label.

(C) (P) Domestica Records.
Music written and produced electro-acoustically by 1/2 on dynamic phrase Korg and Casio synthesizers plus digital and analogue processors, in The Room, during Nov-Dec 2010.
Mestered by Miroslav Piskulic, May 2012.