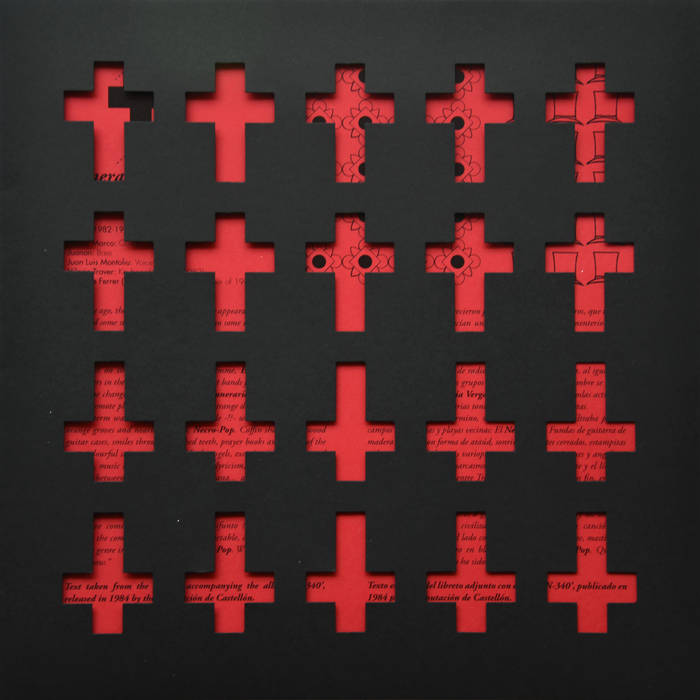 " A while ago, the town of Burriana saw the appearance of some strange guys who had some strange albums, who went on some strange excursions to the local graveyard, whose lead singer wore a strange scapular, who wielded a strange three string bass guitar and who called themselves Radioactivos Neurosos. They recorded strange demos in large quantities which were broadcast on the right local radio programme, Extraños en la Noche (Strangers in the Night), together with most bands from the area. One day, the name changed into the current one, Funeraria Vergara. Apocaliptic gigs in remote places. A few more tones of strange demos.
A new term was being coined, a new style -!?- was filtering around the orange groves and nearby beaches: Necro-Pop. Coffin shaped pinewood guitar cases, smiles through clenched teeth, prayer books and prints of the most colourful saints, virgins and little angels, exercises in healthy sound sarcasm, music between absurd folly and lyricism, between laughter and a grin, between Transylvania and Burriana... anyway, between cheap booze and the most select cava. Lately, in a display of cheeky bravery and in order to get fame, money, glory, lots of women, success, wealth and hit parades in the civilised world in a fast, brilliant and overwhelming way, they have come up with a song -El Difunto (The Deceased)-, wich portrays the commercial, danceable, marketable, chewable and colourful side of a genre in black and white: Necro-Pop. Wich is here, and nobody knows how. "

Text taken from the booklet accompanying the album N-340. Released by the Diputación de Castellón, 1984.

Edition of 350 copies. 180 gram vinyl.
LP presented in a special die-cut jacket which shows through the cut. Includes inner sleeve.