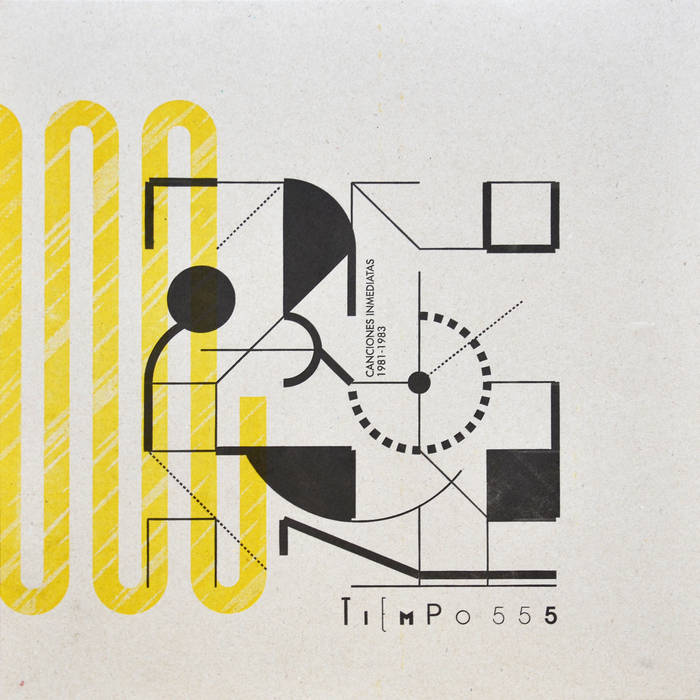 Late 1981. Marino has been building electronic instruments for some years now: a modular synthesizer (SAM), an analogue sequencer, a 4-part mini percussion synthesizer. It’s Monday morning and he’s at home, in the outskirts of Zaragoza (Northern Spain) experimenting with his systems. There’s some music coming from the room right above. Something electronic, with a drum machine. It must be the radio… But no, it is not. The music stops sometimes for an instant and starts again… Someone is playing synthesizers upstairs! Or it might be sounds coming from the future… Marino decides not to take the latter into consideration for the time being. He makes up his mind and goes upstairs, introduces himself and meets Félix, his new neighbour (who has not actually moved in yet). He is, like himself, playing a guitar synthesizer and a KR55 rhythm drum machine. Just fascinating. It’s a fortunate chance meeting. Marino, 19, an Engineering student and Félix, 25, a fresh medicine doctor, decide on the spot to join forces to experiment and build something resembling songs. Both admire Kraftwerk, DAF, Kinks, King Crimson.

Down to work. First thing is getting the machines to know each other and get along well together. Once sequencer, drum machine and modular synthesizer are synchronized, the following months are spent checking sounds, sequences, percussions… and Félix’s guitar and voice overlayed. There’s no specific goal… just the pleasure of machines emitting sounds over which to place chords and melodies. A simple procedure that works fine is set: always to start with a sequenced bass and drum base that depicts a sketch of the track, over which to build up structure, melodies and lyrics. The man-machine interface reports: OK.

Summer 1982. The I Concurso de Rock Ciudad de Zaragoza (a rock contest) has been called and, after some consideration, Marino and Félix decide to try their chances. Well, they are clearly not a rock band, but this first contest is just how things go these days and looking for something remotely related to Electronica is pure SF. They are running short of time, so they prepare two songs for the event: La Vuelta and A través del espejo. Ooops! They need a name for their act… They will be Tiempo 555. The name refers to electronic chip 555, a famed time control device used in many of the SAM synthesizer circuits. They qualify for the contest first round and play their first gig, but don’t get selected for the final show. Their first adventure in the outer world has been short, way too short. After the event, the band revert to their usual activity in the machine room.

January 1983. A new contest comes up: radio show Don Domingo on Radio ! (Radio Nacional de España), in its second edition. This looks like a more serious affair. First prize is a recording deal for a compilation LP with the 5 runner-ups, to be released by RTVE, a real luxury at the time. The board is made up of well-known Spanish critics and musicians, somehow not completely against synth bands. Running against time once again. They record the track they are currently working on, Vuelo en el reloj, and send it to the organizers. Right, they qualify for the next round. Angel, 17, joins them now. He plays keyboards in a dance orchestra, along with Marino. A truly versatile player who also doubles as second singer to Félix. He brings with him his Siel Cruise, a polyphonic analogue synthesizer, an invaluable asset at the time. It´s the first machine able to produce chords the band has ever had, except Félix’s guitar, a perfect contribution to beef up their sound. Recording is real rudimentary: a small hifi 6-channel mixer links the Sam synthesizer, the drum machine, the Siel Cruise, the direct guitar through an unspeakable distortion pedal and two real poor mikes. Everything in strict and time-honoured mono. Everything sounds, is played and sung and recorded live first take on a cassette deck. That’s it for the recording, stored forever on a chrome cassette tape. The contest first round is held in a Zaragoza club, live and broadcast by Radio 1, on the Don Domingo show. All this on Sunday morning, of course. The band, now a trio, record and prepare Semillas del sol and Siempre fuiste así. They qualify. The second round is something similar. They record and submit two more songs, Urnas de Cristal and Síguelo. They qualify for the final round, with the five runner-up bands, in Madrid in June. They do not win, but they get the two songs recorded at the radio studios. Both are released in a shared LP (En el transistor) shortly after. They had made it.

The feeling when they get the album copies is one of contradiction. The sound is clean, as it should be when working in a real studio. Nevertheless, it lacks roughness. It often happens with this kind of compilation records, in which there is no real producer and everything is up to the studio technicians, who usually care only for a “clean” sound. It is not their fault, of course. Anyway, they are happy to have achieved to get this sonic souvenir.

FIN. The band goes on for a short time. Non-musical commitments of its members make the project unviable in 1983. Marino, Félix and Angel continue, to this day, with their individual musical adventures. They are still friends. In the meantime, the synthetic musical family keeps on growing…