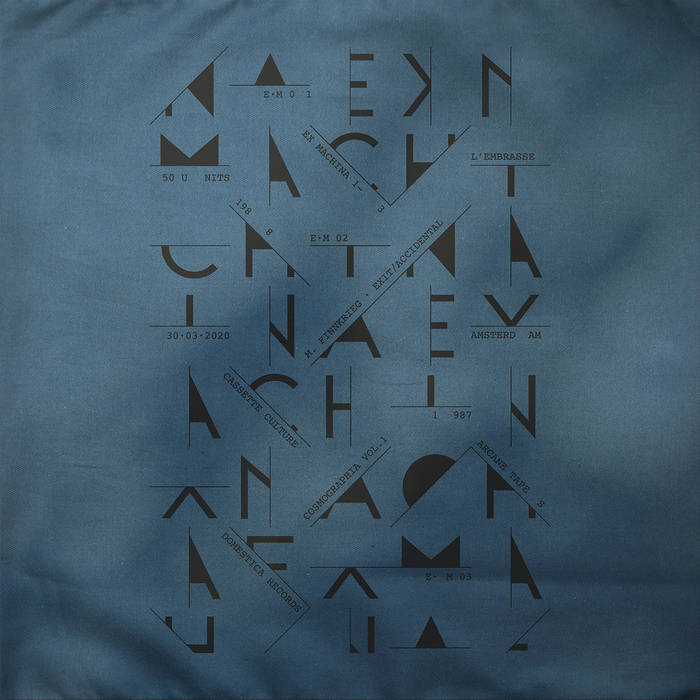 To celebrate the third release on the Ex Machina series, we have decided to produce this special edition of only 50 units, presented in a handmade silk screen printed textile bag, which includes all the publications in the collection E·M: M. Finnkrieg "Exit/Accidental" EP, plus the compilations “Cosmographia Vol.1 (International Cassette Culture)” LP and “L’Embrasse (Amsterdam Arcane Tape Recordings)” LP, at a reduced price, complete with download code and numbered insert with biographies and extra information. Exclusively available via Domestica Records.

E-M01: M. Finnkrieg “Exit/Accidental” is a carefully chosen selection from the first cassette-only album “Exit/Accidental” (1988) by prolific Berlin-based producer and music publisher Mickeyblitz Finnkrieg, very active in the late 80s who, besides self-producing and distributing his music, also single-handedly ran a thriving underground cassette label called Deaf Eye, releasing about ten different productions and several international compilations. M. Finnkrieg worked in parallel lines to any known music circuit. This might be the main reason why his music has remained highly confidential so far. Incidentally: a Mickey Finn – or simply a Mickey – is a drink laced with a psychoactive drug or incapacitating agent given to someone without their knowledge, intending to incapacitate them.

Heavily indebted to bands like Severed Heads and British Industrials in the vein of Cabaret Voltaire, early Test Dept. or Sonic Youth, the tracks selected on this album present the outcome of many a late practice evening and live sessions well into the small hours, experimenting in a completely self-made music lab with tape loops, resistors, capacitors, transistors, 8-bit samplers, guitars and a nice array of synths (Korg MS-20, Roland SH-101, Roland TB 303, Korg Polysix…), drum machines (Roland TR 505, TR 707, CR-78…) and loads of effect gadgets producing a distinctive sound, not far from proto-techno/electro and industrial-disco with touches of EBM and out-there funk. An all-analogic production and loaded with pre-recorded reel-to-reel samples, this recording, salvaged after 30 years, is a perfect illustration of the DIY philosophy and independent spirits of the time, cutting through time barriers with a sound as valid today as when it was first made.

Die-cut 300-gr Kraft board jacket. All the elements on the cover have been hand stamped.

E-M02: This is volume one of Cosmographia (International Cassette Culture), a selection of tracks originally released on cassette in the late 80s plus some never published ones by three European acts: Idee du Femelle (Barcelona, Spain), Genetic Factor (Amsterdam, Holland) and Collectionism (Frankfurt, Germany).

Their common link is the “non-musician” concept as originally stated by Brian Eno, also to be found in Kraftwerk, Can, Cluster and some modern classical composers like Ligeti or Cage. All three were deeply involved in the live scene and the self-distribution ethics of their time. All of them innovated in aesthetics as well as music itself and that showed in their live performances, working with artists from other fields to create a sound-and-vision experience recaptured here on vinyl. All tracks recorded between 1984-1988.

Die-cut 400-gr cardboard jacket. All the elements on the cover have been hand stamped.

E-M03: L’Embrasse (Amsterdam Arcane Tape Recordings 1987) is a compilation originally released in 1987, less than 50 copies were distributed at the time through local shops and it is a portrayal of a unique and very little known scene, generated in the deep underground milieu of Amsterdam. None of the tracks presented on this album has ever been re-released after the ultra-limited original edition on cassette format by Top Tape appeared. At the time, a dozen different acts were featured: Menko (S.M. Nurse founder), Robbie Horsfall, Peter Van Garderen (Nine Circles founder), Der Rudi, Antonia (Tonny Timmermans), No Honey From These, Incredible Coöp (S.M. Nurse members), Beatnik Love Affair, Tranquil Eyes, Cheiron, Spin & Kokkie and The Male Ego.

“We had no name for the music we made. Top Tape released the recordings of those hometape sessions, jams and performances on cassette tape in particular.” tells us Menko Konings, founder of both band S.M. Nurse and independent label Top Tape; “I was forced to start a label (1983) to release my first solo-tape. This is how Top Tape was created. A few years in a row I released music from friends and myself. L’embrasse is a good example of this. (…) We recorded a lot: solo, try-outs, rehearsals, jams, live performances, demos, final versions and spoken audio clips from radio and TV. We also experimented with tapes”.

The recordings offer a fascinating insight into one of several different independent scenes coexisting in Amsterdam more than 30 years ago, which we can now retrieve on this exclusive edition.

Die-cut 300-gr cardboard jacket. All the elements on the cover have been hand stamped.

All the elements of this release has been hand printed. Exclusively available via Domestica Records.